Hello, I just got a trial version of SeoTools, to see if it will fit my needs.

StockTwits connector works great, but I don't see one functionality that I desperately need. I tried extracting messages from a user, but that user has almost 50 000 messages. Everything works great, software itself isn't crashing, but because maximum number of messages per request is 30, and there are 400 requests per hour allowed through StockTwits' API, it means that I can extract 12 000 messages, at most.

After that, I get an error saying that I exceeded a number of requests allowed. Since I need all 50 000 messages, I was wondering if there is a way to actually get them all?

So far, I've tried printing first 30 messages, and then selecting 31st row in Excel, and tried restarting via "Insert" button, but I just get same 30 messages again. Also, I tried disconnecting my internet connection, in an attempt to block requests for an hour and then reconnect and continue, but I immediately get an error saying that connection to the server can't be established.

Since my decision of buying this software depends on the ability to download all messages, I was wondering if there was a workaround? For example, somehow pausing after, let's say 399 requests, and then continuing after an hour? Or simply continuing from the last message downloaded after requesting 399 times?

The answer would be very much appreciated.

Thanks in advance, Petar

I also need to extract messages for a single ticker from a specific user.
For example I need all messages from user "SeoTools" for TSLA.

Is that possible? I'd gladly pay for that function!

Thank you for reporting this issue. I've added optional delay input so you can avoid the rate limit. You can get the updated connector from the Manager:
https://seotoolsforexcel.com/manage-connectors/

I could add it if you find such a request in the StockTwits API docs. Appears to be possible to get messages for specific user or specific ticker, but haven't found a way for both.

I hope that this example is what you're looking for.

Hej Victor, did you manage to check out the link I send you? I'd appreciate it a lot if you could find the time to help me out. Thank you in advance.

Thanks for finding this, I didn't think our app had access to the partner-level endpoints

I've updated the connector with this view: 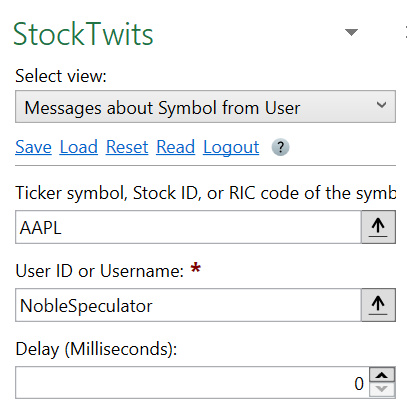 Let me know if it works as you expect, might be some fields missing since I just copied it from another view.

You are amazing!! Let me update, check it out and come back here telling you how amazing you are.

Hi, This is great! Thank you so much!

However, it gives us 20 latest messages and that's it. I understand that this is their limitation. I could bypass this by being able to specify the year, month and the latest message e.g. where to start the next search. For example:

FYI I made up the message number at the end.

I hope this is helpful to you. I'm guessing that you don't need year and month, only the message number where to start the search which I can manually type in.

Really grateful and again, thank you in advance Vic!

See answer in other thread